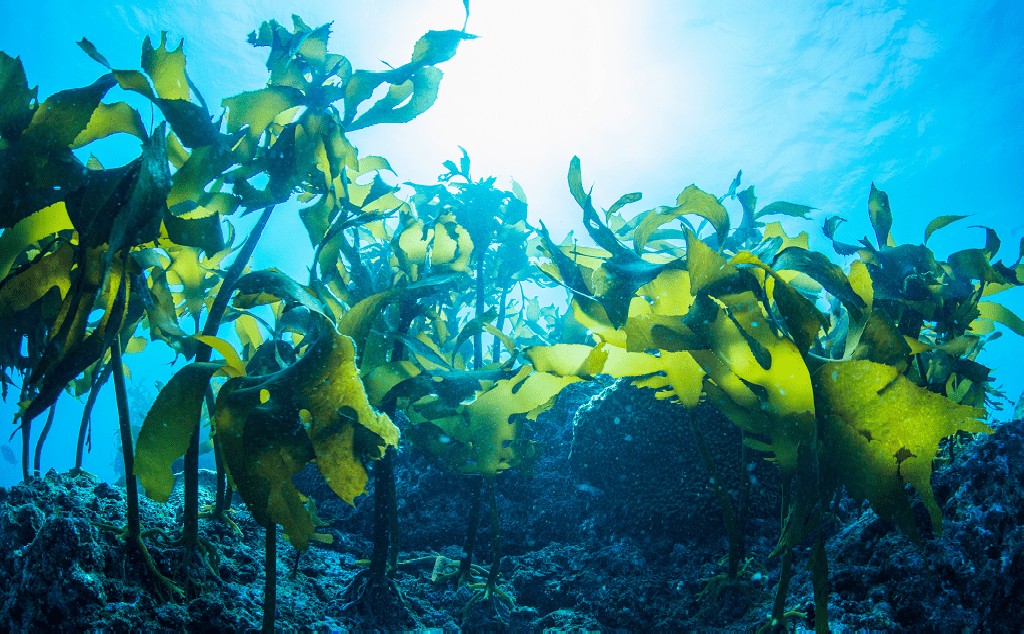 Whether brown, red, green or blue, unicellular microalgae or multicellular macroalgae are all photosynthetic organisms. Although the spread of macroalgal blooms (green tides, sargassum blooms, etc.) have given them a bad name in recent years, the many properties of these marine protists are undeniable and more probably remain to be discovered.

The use of algae is nothing new. The Mayans, for example, consumed spirulina (a microalga rich in protein) in cake form. In north-western France, meanwhile, Bretons (known locally as “goëmoniers” after the seaweed they harvested) have been using macroalgae as a soil conditioner since the 14th century. In the last few decades however, thanks to research breakthroughs, the applications of algae have grown in scope.

A vital role for the planet

As noted by Ifremer (the French National Institute for Ocean Science), algae play a vital role in our planet’s natural balance by contributing 50% of its total oxygen production while absorbing at least 40% of its carbon dioxide.

Due to their high content in carotenoids, omega 3 and hyaluronic acid, algae are now used in the agrifood (1) and cosmetics industries and in health supplements (also called nutraceuticals). They are also used in effluent and metal waste management, the production of  bioplastics (e.g. Algopack), energy production (such as the Diesalg project, producing third-generation biofuel), civil engineering (an example being the Algoroute project, producing bio asphalt from the hydrothermal liquefaction of microalgae residue) or even as construction sealants and in air purification.

Many businesses now specialise in adding value to algae by converting them into ingredients. One such company is Olmix, having cemented its partnership with France’s National Research Institute for Agriculture, Food and Environment (INRAE) in this area. Other examples include Microphyt which has perfected a production technology based on photobioreactors, Solabia which recently acquired Israeli firm Algatech, a specialist producer of microalgae derivatives, or Algaïa which focuses on algae extracts. Fermentalg, originally a producer of useful molecules from microalgae, is now also known for its “algal biofilters” employed in air purification (capturing CO2, particles and nitrogen oxides).

Bio-facades or how to produce algae in an urban setting

The headquarters of the Scientific and Technical Centre for Building (CSTB) has been equipped with eight flat photobioreactors since 2016. These reactors were the first to be installed as part of the SymBIO2 project, absorbing part of the building’s CO2 emissions, helping to block sunlight in summer (reducing the need for air conditioning) and producing algal biomass with high added value. The project thus melds microalgal solar culture and thermal symbiosis with the building. Other bio-facades are planned for the south of Paris.

Although causes may vary (see box), sargassum blooms and green algae accumulations have multiplied over the last few years.

Sargassum is nothing new, being reported by sailors as far back as Christopher Columbus’ time, describing these rafts drifting off the Bermuda coast (viz Sargasso Sea). They are not dangerous while at sea, even providing homes for fauna such as turtles, crabs and birds. Once algae wash up on land, however, they become a hazard. H2S and NH3 are generated during decomposition – two gases that can be toxic when inhaled in high concentrations. These mass accumulations also have an economic impact. They have to be managed (what technologies do we have to gather them at sea?) and cleared rapidly (within 48 hours). They also impact tourism (some affected regions record downturns in visitor numbers). There are regular calls for projects, such as the SAR series for the collection at sea and transfer of sargassum, or the projects led by ANR (the French National Research Agency), the top 12 projects being presented at the 2019 Sargassum International Conference.

How can they be used?

Under the French national anti-sargassum plan, 90% of collected algae remain in storage and had not yet been used in 2018. Five options are being explored:

Important developments are emerging in the monitoring of sargassum beds. Although they cannot prevent on-shore accumulations as such, satellite observation and the resulting scientific modelling enable us to predict where they will occur and how to best plan their management. Meteo France partnered with the French Space Agency subsidiary CLS and its partners (Nova Blue Environnement and I-Sea) to produce a weekly forecast on sargassum levels and their predicted drift across the waters of the French West Indies. The solution developed is possible thanks to optical satellite sensors and radar capable of detecting beds by day or night, irrespective of cloud coverage, and is linked to the scientific modelling of their drift.

Green algae (or Ulva lactuca) are edible macroalgae (Sea lettuce). Excessive nutrient loading (nitrogen and phosphorus) result in their proliferation into “macroalgal blooms”. This overproduction of marine vegetation leads to an accumulation of biomass and organic matter (the “eutrophication of coastal waters”). There are already recognised solutions for preventing these proliferations. Since implementing the first Green Algae action plan (PLAV1 2010-2015), algae levels have fallen from 15,000 tonnes to 5,000 tonnes a year.

There are also ways of utilising these green tides. Like sargassum, green algae must be collected within 48 hours to avoid the health risks resulting from their decomposition (H2S and NH3). However, ulva lactuca is packed full of biomolecules with interesting properties; one example is ulvan, a sugar found in the cell wall. An international consortium(2) recently demonstrated that a marine bacteria (Formosa agariphila) was capable of converting ulvan into fermentable sugars that could be used in the production of bioethanol, or even by the food and cosmetic industries. Once considered harmful, this biomass has now been transformed into a sustainable resource.

Nothing is yet absolutely certain in explaining the increase in sargassum accumulations. They could result from the combination of nutrients brought by large rivers (cf. sediments from soil erosion and the destruction of mangroves) but also the rise in sea temperatures linked to climate change.

For green algae, things appear to be clearer. According to PLAV 1, their spread and accumulation are due to a combination of three factors: the presence of nutrients in high quantities (nitrogen and phosphorus), water temperatures and sunlight exposure (sandy, shallow bays) and geographical factors that favour biomass and nutrient confinement (enclosed bays or dynamic confinement by the tide). In France, this is the case in Brittany (8 bays) and, to a lesser extent, in the Pays de la Loire region. The only option to slow the spread is to limit the supply of nitrogen (viz nitrate leaching), pesticides and phosphorus, in other words, to improve farming practices. These “land-to-sea” approaches are already recognised, including cover-crops, choosing grass over corn, conversion to organic farming, the construction of embankments etc.

2) Roscoff biological station (Laboratory of Integrative Biology of Marine Models) and the universities of Bremen, Greifswald and Vienna