Slight rise in job numbers in environmental activities in France

In mid May, the CGDD Data and Statistical Studies department (Service de la donnée et des études statistiques du CGDD) published the first results of its analysis of eco-activities and environmental employment in France for 2016. Eco-activities are defined here as “activities that produce goods or services for environmental protectionor resource management.”*

In 2016, eco-activities mobilized 456,050 full-time equivalent (FTE) jobs, or 1.8% of total domestic employment in France. Having remained stable since 2011, when environmental production started to stagnate, the workforce numbers saw a very slight increase (+0.5%) between 2015 and 2016, mainly in the protection and restoration of soils and water bodies, an area marked by the development of organic farming (+11.7% of committed farmers).

The two main sectors traditionally providing employment – wastewater and waste – have lost 1,600 and 2,550 FTE jobs respectively. In the water sector, after major investments to ensure compliance with standards made between 2005 and 2013 and which resulted in a compliance rate of over 90% of WWTPs, investment requirements were significantly reduced. Similarly in the waste sector, while the introduction of selective collection and investment in treatment plants had generated increases in employment up to 2011, investments are no longer progressing and the trend is towards rationalising the management of selective collection.

Finally, the renewable energies sector as a whole (hydropower, biomass, wind, solar, etc.) saw its workforce increase very slightly (+1% compared to 2015). But this masks different realities. For example, wind has gained 1,200 FTE jobs while photovoltaic has lost the same number. This significant reduction in PV may be linked in particular to the disappearance of the market for small residential installations (up to 9 kW) in favour of large installations which require fewer jobs, the ratio being estimated at 18 to 4. The Ministry’s recently launched renewable energy release plan aims to brush aside these trends. In this context, the “solar” working group underlined the potential of individual and collective self-consumption, of storage technologies and even the robust renewal of solar thermal energy (cf. increasingly competitive projects, price reductions, etc.). Similar working groups have already submitted their findings on wind and methanization.

Moreover, through the new dedicated roadmap, the circular economy is mobilising local authorities and businesses in particular. The creation of new recycling sectors, the reconfiguring of the EPR (Extended Producer Responsibility) sectors and a structured commitment regarding repair and reuse practices are all concrete and operational courses of action that will have a real impact in terms of jobs. In 2015, McKinsey & Company had already estimated that by 2030 the benefits on a European scale of the adoption of circular economy models driven by public authorities would amount to €1,800bn, with, on top of everything, job creations, skills development and support for initial and vocational training.

In a report published last May*, the ILO indicated that, even if the transition to a “green” economy will lead to job losses of up to 6 million worldwide by 2030, it should lead to the creation of 24 million jobs “if policies are put in place to promote a more environmentally friendly economy.” 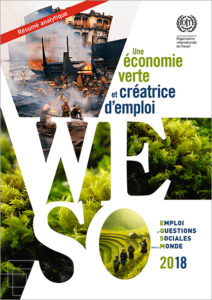 The creations should occur mainly in those regions of the world that introduce measures in terms of production and consumption (Americas, Asia, Pacific, Europe). On the other hand, regions still very dependent on fossil fuels and mines, such as Africa and the Middle East may face job losses if current trends continue.
According to the ILO, net job creation concerns most of the 163 economic sectors analysed. Only 14 of these sectors are expected to lose more than 10,000 jobs, with two – oil extraction and refining – losing more than one million jobs. While electricity production based on fossil fuels is expected to lose 400,000 jobs, electricity generated by renewable energies could gain 2.5 million jobs. Furthermore, the move towards a circular economy could result in the creation of 6 million jobs. Finally, the report also highlights the strong potential linked to the adoption of more sustainable agricultural practices (organic farming, conservation, etc.).

*NB: The CGDD accepts that the activity of eco-activities is still underestimated, with statistical monitoring only partially counting research and consultancy services and also certain adapted products. A new area more in line with that of Eurostat should be published in 2019.