Digester: all about the process

To actively participate in protecting the environment, the agricultural sector and private individuals are using anaerobic digestion more and more. This technique consists of converting organic matter into renewable energy.

In practice, how is the procedure performed? What impacts does it have and in which area are they seen? Some elements of response in this article.

Operators in the agricultural sector have a simple and effective way of reusing their waste and other substrates: digestion. Micro-organisms break down the organic matter. To do this, digestion, a fermentation operation, must be carried out in an oxygen-deprived environment. O2 deprivation is necessary to differentiate degradation from composting from that produced by digestion. Agricultural waste destroyed in this manner is used to produce biogas, which finds a new use as energy.

Even if initially the process seems easy to grasp, farm operators must all the same be fully aware of the possible reactions coming into play, in order to maximise their digester’s yield.

The simplicity of the process, mentioned in the first part of this article, is only in fact an illusion. In effect, several chain reactions take place, each essential to the success of the phenomenon.

A cylindrical tank retains the organic waste. In which deprived of oxygen, it is attacked by bacteria. There are three important steps (there are more in the operation, only the main steps are cited):

The residual matter produced at the end of this process (very resonantly called digestate) is also retained. 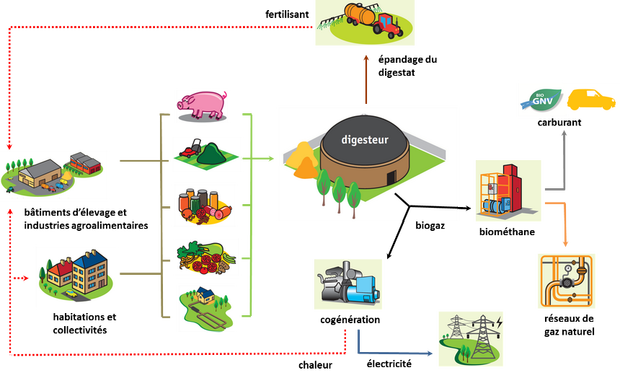 To produce so-called “green” methane, wood “simply” has to be gasified which, under the effect of heat, becomes methane, a mixture of synthesis gas and CO2. This no longer refers to digestion but instead methanation. This process has been used for several decades already. During the Second World War, the old version of methanation entered into the composition of the gasifiers used as petrol at the time.

Biogas produces heat, electricity, and is used as motor vehicle fuel. Perhaps it will eventually completely supplant natural gas one day…Farmers can, in a way, see a “return on investment” since they can use the converted product as fertiliser. Thanks to this conversion to biogas, decomposing matter is no longer conserved. Lastly, biogas production has less of an impact on the environment than coal, petrol or natural gas.

The Grenelle Environnement is just one of the initiatives having enabled the biogas sector to take a huge leap forwards. It is obviously not unrelated to the creation of various subsidies by the French State such as the Heat Fund, or even the increase in the electricity purchase price. In 2011, almost 200 French digestion facilities were listed. 40% of them from the industrial sector, whereas as farms accounted for 20%. In a report by the Ministry for the ecological transition and solidarity last March, the figures mention 400 facilities to date, divided between the agricultural, industrial and territorial sectors.