Plastic pollution in the oceans – what answers do we have? 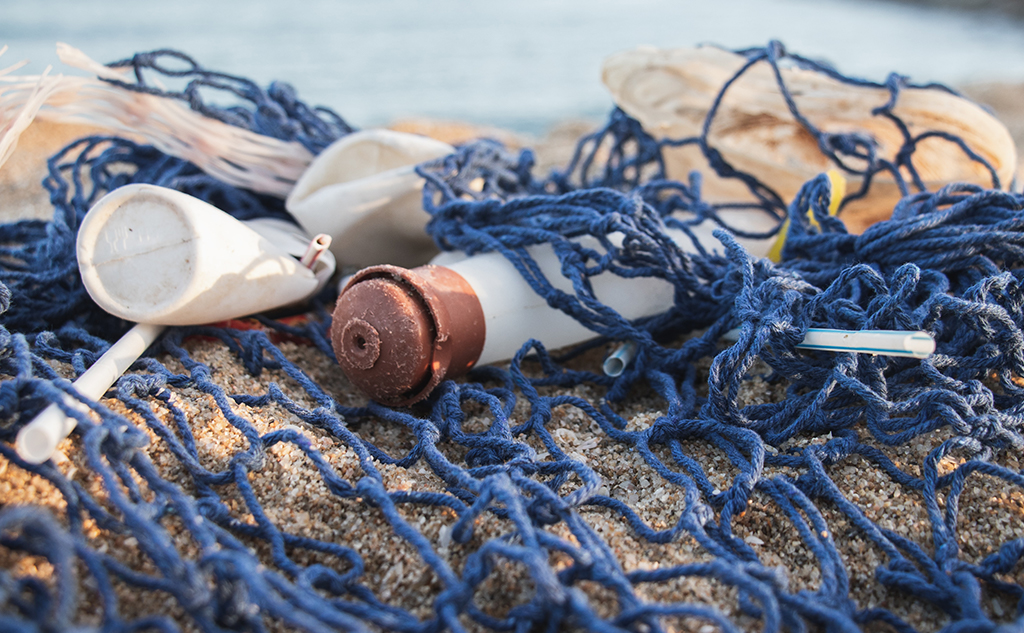 Everyone’s talking about plastic pollution in the oceans, but what’s actually being done? Given the scale of the problem, is it enough to get rid of plastic straws and stirrers, or do we need to look at the sector’s entire value chain? Is the circularity approach enough, if it isn’t focused on waste? How much difference can substitute products make? Lots of questions, for which everyone (the EU, the States, experts, associations) is trying to find an answer, while global production continues apace.

In the 90s, the presence of gyres (or vortices) of plastic waste in the oceans catalysed our attention. Today, thanks to ever more numerous and accurate scientific studies, we know that floating waste taken as a whole represents less than 1% of the plastic in the oceans, the remaining 99% comprising microplastics (< 5 mm) and nanoplastics < 100 nm). We can even find “hotspots” of these microparticles at the bottom of the sea as a result of marine currents, as an international team (including the French Ifremer) recently showed in the journal Science. Microplastics can arise from industrial abrasives and cosmetics, the pre-production of plastic pellets, synthetic fibres released by the laundry process, or the degradation of larger plastic wastes. In the case of these hotspots, the accumulations primarily comprised fibres from textiles and clothing.

Whatever their source, the microplastics are ingested by corals, phyto- and zooplanktons, molluscs, and fish, where they can not only block the digestive tract, but can also provoke changes in growth or reproduction by interfering with metabolisms and hormone systems. Micro-plastics can also act as a vector for pollutants (hydrocarbons, pesticides, heavy metals etc.). These findings are increasingly substantiated by scientific studies, such as those performed as part of the Ephemare project which showed that pollutants present on microplastics affected the development of juvenile fish. In the same vein is the article by Ifremer researchers published in Nanotoxicology at the end of August, which demonstrated through experiment that nanoplastics slowed the reproduction of hollow oysters in particular because they expel their reproductive cells into the seawater. These plastics (here in the form of polystyrene nanospheres) would result in a 79% reduction in the number of spermatozoids, and a 62% reduction in the swimming speed of the remaining 21%.

All this is corroborated by the lessons learned from the schooner Tara’s most recent voyage, which took in nine European rivers and found that not only were 100% of them polluted by plastic, but also that the plastic was already present in the form of micro- or nanoparticles. Therefore, disintegration was starting much earlier than had previously been believed. The mission also observed that plastics which did not appear to be toxic prior to immersion demonstrated positive toxicity after being in the rivers for a month. Certain plastic materials released their additives (bisphenol A, phthalates) and others, as seen above, act as “pollutant sponges”. 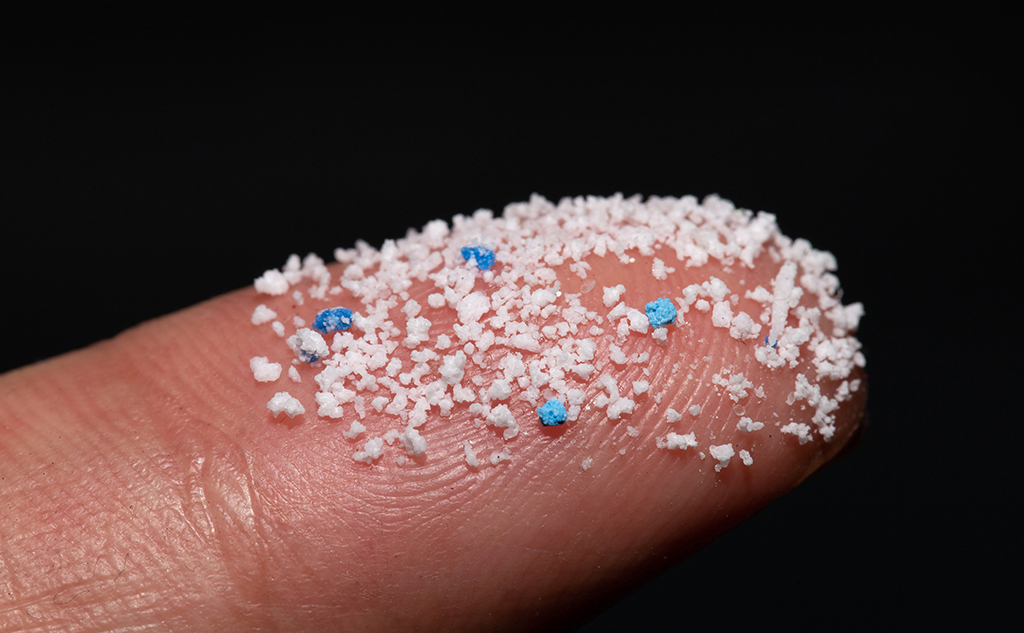 The answers lie on land

If cleaning-up the oceans by somehow collecting-up these microplastics today seems impossible, that doesn’t stop work being done to limit wastes in future. In the first place, that suggests working on the production and use of plastics. This is one of several recommendations by the European Commission in its new Action Plan for the circular economy, which is geared more towards changing how we produce and utilise plastics.

According to PlasticsEurope, the European association of plastic material producers, global production was 335 Mt in 2016, increasing to 348 Mt in 2017 and reaching 359 Mt in 2018. Could such growth one day be slowed by a potent combination of substitute materials and the incorporation of recycled materials? That’s still a long way off. By way of example, in 2018 France recycled 26% of plastic packaging and 57% of bottles and containers, the members of the Plastic Materials Recyclers’ Association (the Syndicat des régénérateurs de matières plastiques – SRP) producing 435,590 tonnes of recycled plastic materials. Note however that a French start-up (Poly to Poly) is positioning itself as a marketplace for recycled plastics.

Substitute materials, or less “from oil”

Over the years, various substitute materials have seen the light of day. But faced with biodegradable, compostable, biosourced, oxo-degradable etc, it’s very difficult for someone not an expert in chemistry to make sense of. That’s partly why the European Environment Agency at the end of August published an information note, (“Plastiques biodégradables et compostables – Défis et opportunités”) [Biodegradable and compostable plastics – challenges and opportunities], which provides an overview of the plastics we may encounter day-to-day and proposes a definition for each (see call-out).

According to this note, “most of the plastics we use today continue to be made from fossil sources, and recycling rates remain low. Due to public demand some producers have introduced plastics that are biosourced, compostable or biodegradable, but these represent barely 1% of the market.  Intended to reduce the problem of plastic pollution, these new plastics still have to be disposed of correctly so again, it’s necessary to know how they will degrade. The fact is that conditions are very different between a domestic compost bin and an industrial composting unit, never mind out in the open environment.”

The note states that “new advances in the use and disposal (of these plastics) would allow them to be more effectively used.” Finally, the authors consider that better awareness of disposal options for biodegradable and compostable plastics will help to resolve the problem of plastics in Europe.

Biodegradable plastics are designed to biodegrade in a specific environment (water, soil, compost) under given conditions and over a range of timeframes.

Biosourced plastics are entirely or partially produced from biological raw materials, in contrast to the fossil raw materials (petroleum) used in conventional plastics.

Non-biodegradable plastics last a long time. They may disintegrate into smaller and smaller pieces, forming microplastics and building-up in the environment.

Oxo-degradable plastics contain additives which, as they oxidise, either cause the plastic to fragment into micro-plastics, or to decompose chemically.

What are the recycling options?

Recycling plastic products is a mechanical process: “regeneration” (washing, grinding, sorting, extrusion of pellets to make the granules), which relies on accurate sorting of the material flows entering the process and may have further constraints (in terms of colours, cleanliness, age of the recycled materials).

Recycling can also be done chemically. In this case, there are three main approaches. Depolymerisation allows the polymer links to be broken, returning the material to a monomer state (for complex PET packaging, coloured or opaque material, or multi-layered materials). Several companies and research organisations specialise in this sector: Carbios and IFPen (France), Loop and Pyrowave (Canada), Garbo and GR3N (Italy), Ioniqa (the Netherlands), Jeplan (Japan) (1).

Dissolution in a special solvent followed by filtration is best suited to PE-based films and PS or PP packaging. That’s the route selected by American PureCycle Technologies (which has just hooked-up with Total, who have committed to purchasing part of the recycled PP output), also by the Canadian operator Polystyvert and German players APK and Fraunhofer IVV.

The third possible route, conversion via thermal methods (pyrolysis, gasification) allows plastics (PE, PP, PS) to be transformed into chemical compounds for plastics processing, or into combustible liquid and gas for use as fuels. British company Recycling Technologies, for example, transforms plastics into hydrocarbons using pyrolysis. In the same way, the Chrysalis unit invented by the Lyon-based Earthwake association can convert 160 kg of plastic waste into 120 litres of diesel per day, following several pyrolysis cycles. The fuel produced is stabilised using additives. Two skip wagons running on 10% “plastic diesel” are already on the road in the Alpes Maritimes region. However, there seems to be no ceiling on its use in electrical generators. Pilot projects could see light of day in Senegal and Tunisia.

We should also note the catalytic process (VolCat), developed by IBM researchers, which digests polyesters to produce a material that can be directly transformed into pure plastic, so can go straight into industrial processes.

According to estimates, between 8 and 10 billion tonnes of plastic wastes enter the sea every year. Detecting and quantifying this is then important, particularly for guiding decision-making. Within this sector, of interest are two projects underway by the Pôle Mer Bretagne-Atlantique cluster. The Deep Blue project has been able to develop a new laser source that can equally well detect micro- and nanoplastics, bacteria, hydrocarbons and other pollutants in the oceans using a photonic technology (led by Oxxius). Meanwhile, the Microplastic project aims to develop tools for detecting and quantifying microplastics and associated contaminants in catchment areas and coastal water bodies, and for identifying their sources.

1) IFPen, Axens and Jeplan have signed an agreement to develop a recycling method via a process of depolymerisation (through glycolysis) and purification of all types of PET-based wastes (bottles, films, tubs, textiles). Axens is to commercialise this process (“Rewind PET”) by 2022.

Lire aussi : [Video] Ocean Plastic Pollution: the solutions are on land, not at sea