More environmentally-friendly ports: we’re getting there 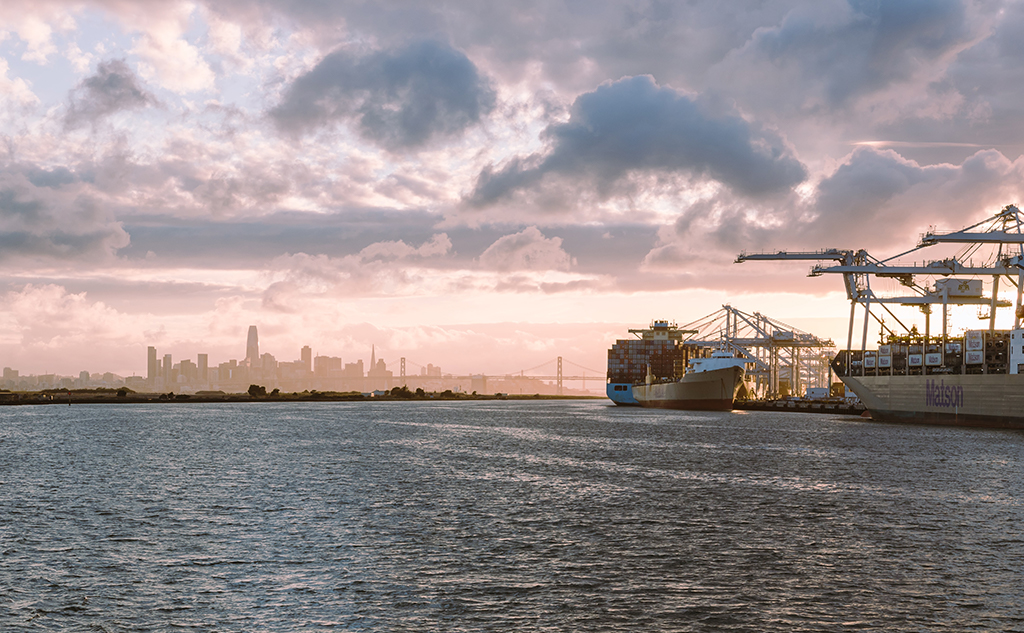 Ecological and energy transition of ports, sustainable or future ports, EcoPorts… There’s no shortage of vocabulary in the port sector describing the many activities underway to preserve the environment and climate. These initiatives multiply as the regulations evolve, carried further by the determination of certain key players. Air, energy, climate change, noise, waste, sediment and water are all priority themes within every discussion, as are relations with the local communities and economic development agencies. Here are a few examples.

A port is a hub where the issues of transport, logistics, the maritime economy, energy and industry all come together, in other words, the full gamut of environmental impacts. Environmental awareness is nothing new, as demonstrated by the foundation in 1993 of ESPO – the European Sea Ports Organisation – itself successor to the European Commission’s Port Working Group, established as early as 1974, but the last ten years or so has seen resurgence.

How ports’ environmental priorities have evolved over 25 years

ESPO* instigated both the first Environmental Code of Practice in 1994 and the EcoPorts, initiative and has been publishing ports’ top ten environmental priorities every year since 1996. At the outset, the most pressing questions focused on water, dredging, dust and soil contamination. Air quality first appeared in 2004, followed by energy consumption in 2009, while climate change crept onto the radar only in 2017 when it was tenth in terms of priorities. These three questions, which overlap in several aspects, are today at the top of the priority list, ahead of noise and relations with the local community.

*ESPO has a joint office with EFIP, the European Federation of Inland Ports

For air quality, ports suffer the joint impacts of traffic (ship emissions) and of the port area’s own activities (refineries, power stations, petrochemical industries, metals processing, etc). A turning point came on 1 January this year with the advent of the new IMO regulations limiting the sulphur content of fuel oil used by ships to 0.50% (previously 3.5%). These low sulphur regulations do not apply to ECA (Emission Control Areas) which like the Channel-North Sea are already limited to 0.1% (and could soon apply to the Mediterranean). The fuel aside, other actions may also be taken by ships approaching port, such as reducing their speed, and using wind-power propulsion systems such as SkySails etc.

Energy represents another key challenge for port areas, both in terms of consumption and generation. Today, Europe prohibits the burning of high sulphur fuel by ships berthed for longer than two hours. This has triggered the widespread electrification of quays through the installation of cabling and the converters needed to overcome the problem of varying voltages.

Ports are also themselves putting in place low carbon vessels, such as fully-electric pilot boats (for example the Green Pilot being developed by MGH) or the hydrogen fuel cell-powered water shuttles of Hyseas Energy.

One such project is the “Smoke-free ports of call” scheme operated by the regional authority for Marseille, Toulon & Nice, which encourages the electrification of quays, the use of alternative energy sources (LNG, hydrogen etc) and the installation of particle filters for ship exhausts, together with speed reductions on ships within the port precinct.

In parallel, the refurbishment of some port areas is attracting factories which produce equipments for renewable energies (such as the blades and nacelles for offshore windfarms at Le Havre with Siemens-Gamesa) or facilities harnessing renewable marine energies.

The impacts of climate change on ports may vary from one location to another, but have much in common: rising sea levels, reduced river flows (with knock-on effects on engineering structures, shipping traffic, and the navigability of estuaries), rising air and sea temperatures (with impacts on work scheduling) and higher water salinity (affecting metal structures), changing rainfall patterns, more frequent phenomena such as storms, droughts, extreme heat (impacting infrastructure and activities), changes to some production patterns, especially in farming (impact on trade and hence on the use of ports), etc.  Adaptation measures could include installing new systems or re-imagining existing ones (for example reinforced flood barriers). Digital solutions are also being developed, such as that from Waves’n See (prediction of submersion and erosion). More widely, we have the interesting Interreg project assessing the impact of climate change on three ports in south-western Europe (see box).

The Ecclipse project, looking at Aveiro (Portugal), Bordeaux (France) and Valencia (Spain), seeks to develop a mutual methodology to analyse and quantify the risks of climate change in the medium term using predictive models and to develop an adaptation strategy based on a shared scientific basis for the whole European port network. The project is scheduled to run for three years, from April 2020 to April 2023.

On the same topic however, improvement works such as the erection of barriers generates sound pollution. Project sponsors may commission specialist firms – such as startup Quiet-Oceans – to offer a range of services ranging from assessment of the initial situation before works commence, right through to setting-up of the required protection, including the drawing-up of acoustic impact assessments, etc.

A further key issue for every port area is waste, either from ships or generated by the port’s own activities. While an 80:20 ratio is often cited (80% of marine waste emanating from landside activities and 20% from shipping), in European waters 30% of the waste comes from shipping. To reduce the scale of this shipping-generated pollution, a directive coming into effect in 2021 requires that all waste produced aboard ships or recovered in nets is brought ashore. Port facilities will obviously need to be ready to handle this influx. A best practice guide on this was published in March 2018 (viz MEPC 72, together with 4 ad hoc circulars).

A new life for mooring lines?

French research and innovation centre CERIB is running a project to recycle discarded ship mooring lines by incorporating their fibres into concrete. This project, called Amarcrete, plans to identify sources, industrialise the cutting process and formulate the production of fibre-reinforced concrete.

Transiting from one continent to another, ballast waters can introduce invasive aquatic species. In fact, it is estimated that 60% of such introductions could be traced back to maritime shipping through ballasts or ships’ hulls (viz biofouling, particularly by algae and molluscs). This is why the IMO made ballast water treatment compulsory for all shipping in its 2017 Convention, and is currently drafting regulations for hulls. Ballast water can be treated using UV as an alternative to electrolysis, filtration or chemical treatments. BioUV, one of the experts in this field, recently signed a contract with CGA-CGM to equip 17 ships with its BioSea system.

A key topic associated with port sites, dredging operations churn up several issues: water quality, biodiversity/resources, energy etc.  Beyond the new forms of engine propulsion systems, several companies offer specifically-targeted solutions. For example, Environmental Sediment Treatment (EST) and its robot mud extractor received several accolades during COP21 in 2015. Meanwhile, Envisan specialises in the processing and recycling of sediment and silt. This French subsidiary of the Jan de Nul group signed a contract at the end of 2018 with Le Floch Dépollution to process sands contaminated with hydrocarbons following the collision of two ships in the Mediterranean.

Finally, ports and estuaries ensure the quality of their water is monitored, working in partnership with their respective water suppliers, inter alia. In this sphere, solutions are evolving every year and always integrate increased digitisation. Examples over the last few years include aquatic drones capable of undertaking sampling and inspections without contaminating the environment; self-contained on-site sampling and measurement systems; and measurement and sampling systems carried by aquatic drones.

What about relations with the local community?

A port zone naturally has a close relationship with its “port city”. One of the best illustrations of this is Industrial and Territorial Ecology (ITE) and all the synergies it brings. A classic case study and international benchmark for this was the first industrial ecology project, undetaken in a port setting: the famous industrial symbiosis at Kalundborg in Denmark which dates back to the 1960s, and is based on the concept that “one industry’s waste and co-products are another industry’s resources”.  In France it was also a port which developed the first example of industrial ecology: Dunkirk has for many years channelled the heat from its blast furnaces and warm water from its power station’s cooling system into a city-wide heating network. Other maritime or river ports have subsequently devised similar projects to harness their own local resources. For example, through the Charte du Grenelle de l’Estuaire which links Le Havre, Port-Jérôme and Honfleur, the port at Le Havre provides a shared waste management system, captures excess heat, re-uses acids and bases and is extending its shared process water system. La Rochelle also has a sustainable development charter for the port area and is working on its MER project (Matières Energies Rochelaises), an association bringing together local businesses and authorities in the port area. Strasbourg has a pooled energy purchasing policy and recovers pallets to supply local companies such as Soprema etc., while at Marseille-Fos the PIICTO platform identifies synergies and presents development opportunities such as recycling CO2 (the VASCO2 project).  Similarly, a European project currently operating on the Salaise-Sablons site (Be Circle) is using a GIS mapping application and an enriched database.

Some twenty years ago the Port 2000 project was launched in Le Havre to accommodate giant container vessels while overcoming tidal constraints. This project included key environmental actions, such as the creation of a bird habitat in the estuary and the on-site re-purposing of the dredged sediment. More recently, in 2016 GPM Guadeloupe launched the 15-year biodiversity-focused Cayoli development programme. Port development can also include ecodesign in infrastructure projects.

As described above, digitisation is making inroads into every level of port activity. The recent BlueCargo initiative is one such example. To offset the lack of visibility of containers in cargo ports, two postgrad students came up with the idea of developing predictive algorithms to help shipping terminals optimise their container storage areas: this is the concept behind their BlueCargo startup. Watch this space…