Reducing the environmental footprint of ships, what solutions? 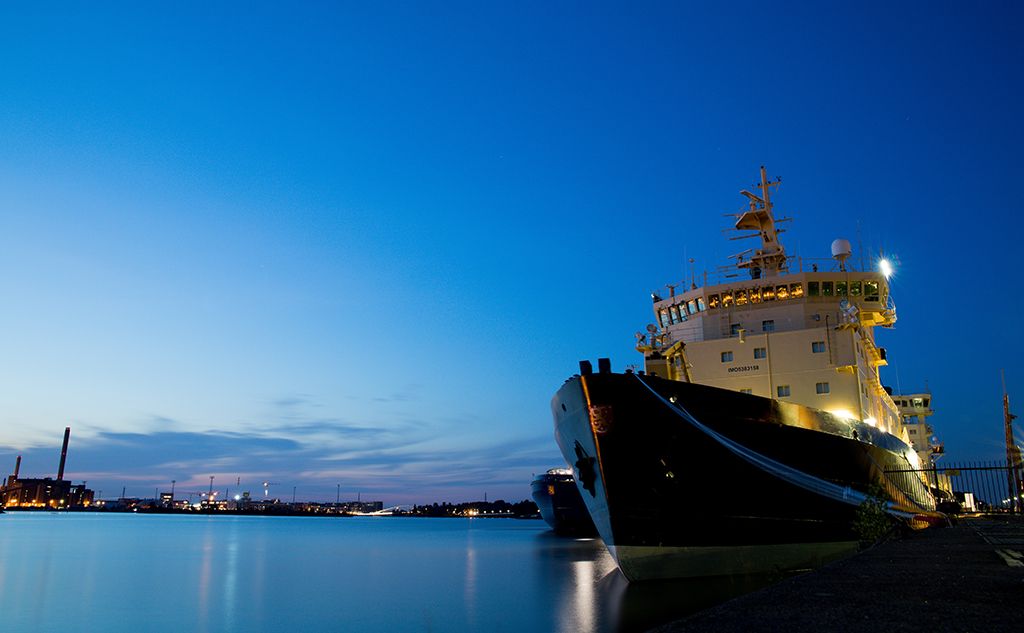 Making ships “greener” is not limited to changing their engines, even if this is an important part of the process because of its considerable impact on the climate, the environment and health. Solutions exist at all stages of the life cycle of ships. Others are under development. Here are a few examples.

On September 26, World Maritime Day was dedicated to the theme: “Sustainable Shipping for a Sustainable Planet”. It was an opportunity to recall that more than 80% of goods traded worldwide are transported by sea and that the world fleet includes some 95,000 ships, 40% of which are bulk carriers, 30% oil tankers and 13% container ships. Moreover, for some, maritime freight could quadruple by 2050.

The first reflections to propose less impacting vessels start even before the shipyard, when it comes to designing the architecture of the vessels and choosing the materials and paints (cf. bio-based materials, varnishes and anti-fouling paints…).

Some sailboats combine wood, jute fibers, bamboo, flax, hemp or basalt with bio-based resins such as the Sterne 25 developed by the EcoTransat association in partnership with the Ecole des Mines d’Alès (France). Even if the products are not 100% bio-based, they are a first step in the mutation.

Fouling refers to all the plant and animal organisms that develop on the underwater part of a boat: algae, mussels, shells… An “anti-fouling” paint releases toxins that limit the development of these organisms, also known as hull fouling, bio-fouling or biological fouling. It thus contributes to limiting a phenomenon that poses major problems in terms of biodiversity: the introduction of invasive species, which can disturb the ecosystems where they settle, or even contribute to the disappearance of endemic species. As anti-fouling paints are generally made from petroleum derivatives, Europe launched a call for projects this summer to find alternative solutions. Prior to this, an interesting research project had been conducted to identify tropical marine molecules that can be integrated into a new range of paints (‘Biopaintrop‘ project, with Arvam, Nautix and Bioalgostral). It should also be noted that, in addition to fouling, the introduction of invasive species by ships also occurs via ballast water and seawater intake tanks.

Another important point to be studied in the design phase is how to limit noise, vibration and electromagnetic nuisance, which is another major challenge for biodiversity. As yet little studied, the reduction of these nuisances could make it possible to avoid, for example, mass strandings of cetaceans.

The main work on the “green ship” concerns the energy sources and motorization of these ships. This concerns both the propulsion of the ship and the onboard energy and energy storage. Here, the possibilities are diverse and still progressive: we will not move to “zero fuel” ships overnight. The choice of LNG (liquefied natural gas) is a first step. According to estimates, an LNG ship emits up to 20% less CO2 than a heavy fuel oil ship and this fuel eliminates 99% of sulfur oxides and fine particles as well as 85% of nitrogen oxide emissions, hence its interest in terms of air quality and therefore public health. CMA CGM, for example, announced at the end of September the entry into service of the first of a series of nine 23,000 TEU LNG-powered container ships. Bio-methane-based solutions are also being developed, which have the added advantage of a smaller carbon footprint. 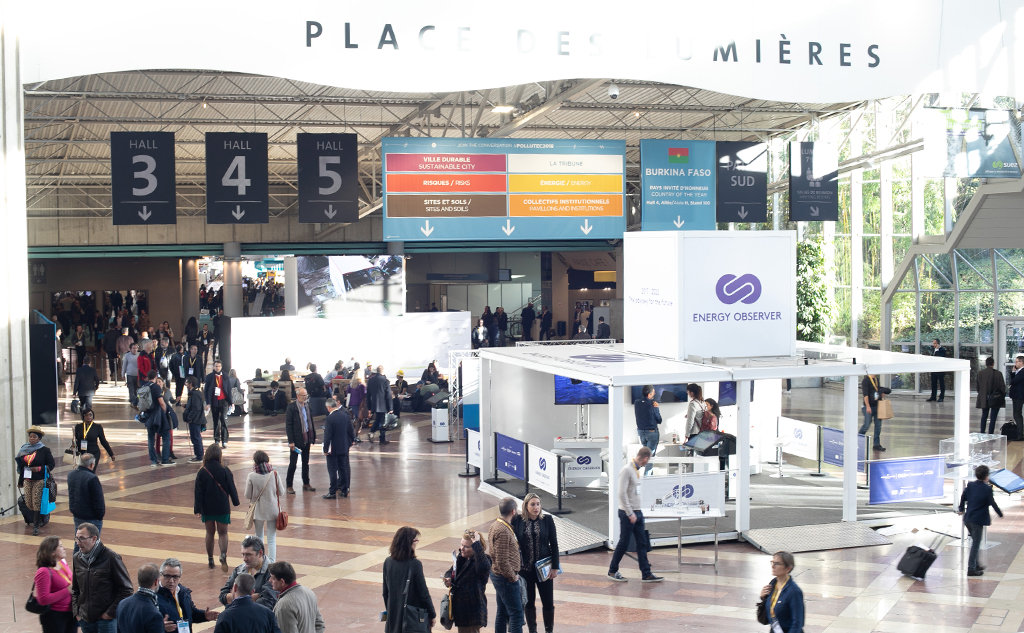 Energy Observer stand at Pollutec in 2018

At the same time, new hybrid engines are appearing with their associated energy and storage solutions: heat pumps, hydrogen, batteries. These solutions are being deployed on a small scale, on specific vessels, but could eventually be more widely used. It is worth recalling the interest of Energy Observer, a floating laboratory of alternative solutions since 2017. EODev (Energy Observer Developments) has just finalized its first round of financing (€20 million) to accelerate the industrialization and marketing of its hydrogen solutions (GEH2 medium-powered electro-hydrogen generators, REXH2 on-board hydrogen energy systems for maritime and river use – propulsion and life on board – and STSH2 floating mobile stations for the production and distribution of green hydrogen).

To further reduce energy consumption, other solutions are being considered, such as reducing the speed of ships, more precise work on routing to make better use of currents and favorable winds, but also the deployment of sails, wings or kites as a complementary means of propulsion. From anecdotal evidence some 15 years ago (e.g. the German SkySails won the EEP Awards at Pollutec in 2007), ship traction is gaining momentum and solutions are beginning to be deployed on all sizes of vessels, such as the kites of Beyond the Sea or AirSeas. It can help reduce ship consumption by up to 20%, a percentage that could be increased by combining it with other ‘clean’ propulsion modes powered by tidal or solar electricity. Another French player in the field, Neoline is working on a pilot roll-on/roll-off cargo ship with main propulsion by a main-sail engine and auxiliary diesel-electric propulsion. Current research projects include, for example, ‘Deriva’, which aims to develop a new concept of wing sail based on a patented system of asymmetrical thick profile inversion (with CWS), or ‘JIB SEA’, approved last June to develop rigid headsails for ‘new generation’ liners (with Multiplast, Gsea Design, Chantiers de l’Atlantique and ENSTA Bretagne).

Technological developments related to ships focus on reducing GHG emissions but also pollutants such as sulfur oxides, nitrogen and fine particles. According to Armateurs de France, “given the current state of available technologies, ship owners have the choice between using a fuel at 0.5% maximum, installing a scrubber or choosing gas propulsion”. Since January 1st, the IMO-Marpol ‘Global Sulphur Cap 2020‘ regulation has required the use of fuel with a sulphur content of less than 0.5% (compared with 3.5% previously). It is still possible to install a scrubber (exhaust gas cleaning system), which allows the polluting gases to be solubilized and absorbed in water, and the cleaned fumes can then be released into the atmosphere. However, there remains the question of the treatment of the scrubber water, in the case of an open circuit. Finally, gas propulsion (whether LNG or liquid biomethane) should develop, as seen above.

We should also note the CAPNAV research project in progress, whose objective is to quantify precisely the fine particle emissions in order to propose, in the long term, technical solutions and new regulatory standards to reduce these emissions. Launched in September 2019, this three-year project will apply to the maritime sector real-time onboard instrumentation already validated in the automotive and aeronautical industries (see RDE-type measurements: Real Drive Emission).

According to the directive of 17.04.2019, waste from ship means all waste, including cargo residues, generated during the service of a ship or during loading, unloading and cleaning operations (even those passively fished, in the case of fishing vessels). The Marpol Convention (see box) has evolved to set stricter standards and prohibit the discharge of waste from ship at sea. Vessels are required to take them to ports that are supposed to have the necessary infrastructure.

For its part, ballast water treatment aims to kill or inactivate the organisms present in these waters intended to stall the ship. Like any water treatment, it can be done mechanically (filtration, flocculation), chemically (chlorine, ozone) or physically (UV rays, ultrasound, deoxygenation). In fact, many water players are positioned in this field. Note, for example, that Bio-UV offers the BioSea solution, which has already proven itself and was recently chosen by CMA-CGM for its nine new LNG container ships.

As you can see, solutions exist for each phase of the vessel life cycle. But whoever talks about life cycle must also think about dismantling. The question remains fundamental. According to estimates, out of the 800 to 1000 large ships that are dismantled each year, 90% would be dismantled in Southeast Asia in conditions that are little – or not at all – respectful of the environment and the health of workers. An international convention was adopted in May 2009 but has not yet entered into force due to a lack of sufficient ratifications (see criteria of fleet representativeness and recycling capacities). In the meantime, the EU has adopted a regulation obliging ships flying the European flag to go to an EC-approved shipyard. As of January 1st, 2020, the number of these shipyards stood at 41, including 34 in Europe, 6 in Turkey and one in the United States.

Adopted in November 1973 and entered into force in 1983, the International Convention for the Prevention of Pollution from Ships (Marpol Convention) covers oil pollution, pollution by noxious liquid substances carried in bulk or by harmful substances carried in packages, sewage and waste from ships, and air pollution. It is interesting to note that, as early as the 1970s, the convention stated in its Annex V: “Garbage from ships can be just as deadly to marine life as oil or chemicals. The greatest danger comes from plastics, which can float for years“…