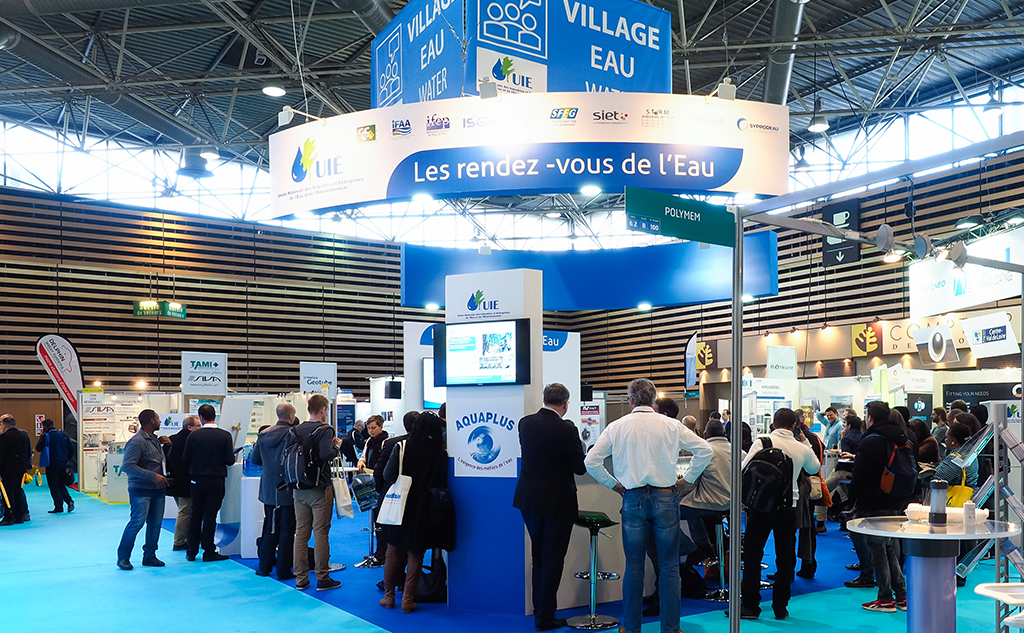 Accounting for almost a third of exhibitors, water ranks alongside waste as one of the cornerstones of Pollutec. That’s even more the case for particular sub-sectors such as pumps and piping, for which Pollutec is the only major industry event. These traditional show sectors are however by no means any less dynamic and are constantly innovating, with a focus on greater energy efficiency, robustness and new geometries and features.

In parallel we’re seeing a fundamental move towards greater economy and protection of resources. This is very apparent from the many innovations presented at the show every year. For example, in 2000 the quest for energy efficiency was illustrated by OLOID, an agitator/aerator which moves in the same way as a paddle. In the area of water quality, emerging problems with micropollutants, pesticides and other endocrine disruptors, and research into their greater abatement, are being addressed through the development of ever more effective membranes, “advanced” oxidation methods (Orège in 2008, Loïra in 2009, Ozoval in 2012) and  biological innovations (phyto-purification, fixed bacteria, enzyme cocktails, etc.).

The strongest trend, however, will be that of water efficiency. In 2010 the Swiss firm Quantis introduced this concept to Pollutec under the term “water footprint”. This issue was of course already being addressed to some extent through initiatives such as water recycling (re-use), leak detection (Biwater, Metravib, Socomex, Hydreka, Sewerin, Primayer, Hydroscan, Ax’eau, etc.) and alarm systems (Hydrelis water-breaker in 2008). However, solutions are now clearly converging on this new notion of water strategy (in the same way as we speak of energy strategy), backed by the power of digital tools.

“Water efficiency is a concept that runs counter to conventional water management strategy, which has long relied on treatment. Like health and environmental issues, there has been and remains the need to raise awareness in order to set out a water strategy, with real analysis of flows and usage,” says Jean-Emmanuel Gilbert, co-founder of Aquassay, who’s been working on this for seven years (in real-time data collection and analysis) and is counting on Pollutec to spread the word. “Everyone was working on energy efficiency. The mistake was in considering water an unlimited external utility.” This misconception is becoming all the more apparent as water stress increases due to climate change, including here in France, which directly impacts on industrial activity.

That’s the average percentage recorded at global scale (around 30% within Europe), a figure which highlights the challenge presented by fragile and less accessible water resources. That raises the question of how increasingly efficient treatments and water efficiency measures are responding to this challenge.

Filtration-separation has been a key area for the water sector, with Pollutec devoting to it a village shared with supercritical fluid technologies. This approach has seen a wide range of application, the first breakthrough coming in 1994 with the first membrane bioreactor from Lyonnaise des Eaux. This marked the beginning of a series of developments around this combination, consolidating French expertise in the membranes field (for example Tami with innovative ceramic membranes, CTI and Polymem). There has likewise been a whole series of innovations in ion-exchange textiles, with award-winning research from 1997 onwards. Intissel Technologies’ attracted considerable attention in 2007 with its own innovation (paving the way for the well-known colour run prevention sheets), followed by more recent innovations from Magpie (2013) and Ajelis (2016). And we shouldn’t forget biosorption solutions on bio-sourced materials, such as those presented in 2016 by Pearl.